Relax In A Tiny Home!


There has been a great deal of attention being paid to tiny houses and those who choose to live in these incredibly small homes. However one of the most popular reasons people say they choose to live in these small homes is that they are incredibly relaxing. While some of us insist on having as much space as possible in our homes, these folks choose to live in only a small amount of space that is necessary for living. The idea of living in one of these tiny homes may seem difficult for many to understand, however there are many psychological benefits of tiny house living that prove their relaxing nature.

There are many common beliefs that follow the idea of tiny house living that are either misguided or mistaken. For instance, many believe that tiny houses are constricting and confining, however those who live in tiny houses beg to differ. Another common belief is that there is little to no storage available in tiny houses, and again these folks couldn’t be more wrong as the people choosing to live in these tiny homes find places for storage just about everywhere. Some people even feel as though a tiny home would prevent the ability to have a family, but again folks living in these incredibly tiny houses beg to differ and many even have young children.

There are several psychological benefits of living in a tiny house that make them relaxing, and even help the inhabitants feel more comfortable than living in a larger home. Some have even said that it makes their lives so much simpler. There are also places that rent tiny houses to people who want to try them out for themselves before building or buying a tiny house for themselves. Not only will this provide people with a true insight into living in a tiny house, but to experience the relaxing effects that these amazingly small houses provide.

It is in our nature to nest, and it can be seen in young children all over the world as they build forts and tree houses. Small homes provide their inhabitants with a calming effect due to the solid definition of their own little world. It also provides a smaller version of the world within that of our much larger one. Another example of nesting that we show signs of include that of when a woman is pregnant. The need to perfect the space that the child will be in is another excellent example of nesting and shows that the amount of care we put into the space allows for a more relaxing environment.

Many people find peace in living in a way that meets our personal values. For instance you may find relaxation and calm knowing that your life is simplistic and takes very little toll on the planet. It can also provide you with a way to feel more resourceful and independent from the rest of the world. A great deal of this can be seen in the amount of resources that these homes use as they are built to be efficient in every way and ensure that the inhabitants use as few resources as possible by narrowing down the amount that is available to the home.

One of the big things in tiny house living is the lack of unnecessary space as every nook and cranny is packed with the essentials. This can make life easier as you need to limit your options when purchasing unnecessary items such as the need for more than 9 pairs of jeans or that extra box of cereal that you know simply won’t fit in your cupboards. This is the same for many other choices that are made while shopping or stocking up on things that you need. Space is the first thought and after that the realistic approach to necessity follows.

There is a feeling of complete satisfaction that is felt when you build your own tiny house, and it comes from the feeling of completing a well-planned out quest. The completion of a goal is nothing but satisfying and can lead to overall relaxation upon completion. Not only will you be able to enjoy a job well done, but the feeling of enjoying your new home that you built with your own two hands and the satisfaction that no bills will result from your new tiny house.

There is a certain freedom that comes from living in a tiny house as you can technically take it anywhere you want to go. They are generally built on trailers or trailer beds and have an ease about them when it comes to moving. All you need to do is secure your things and go without any hassle. Not only is moving so much easier if you need to change jobs, but a place to put your tiny house isn’t even a thought since there are several locations that you can choose from. The freedom from bills and things that may otherwise tie you down can be incredibly relaxing once you get to thinking about it.

Since you would generally build a tiny house yourself, there are very few bills included when building your home. Most people build them bit by bit as they attain the money for materials, while others go full force to build them immediately. However the cost of a tiny home that you build yourself and a larger home that you have to buy is like night and day. You don’t feel like you are working to simply pay off your home, and there are fewer bills associated with tiny houses as many run off of propane tanks and electric generators.

While it is commonly thought that tiny houses are for single people and couples, families can also reside in a tiny house. While space is nice, tiny houses focus on necessity over desires and can even help create a more intimate atmosphere to those who live in them. There are also many models of tiny houses that are more than a single story and adding on a new addition, while challenging, isn’t a complete impossibility.

By John Greene
Follow:
I love my involvement with Freecycle USA. We are an organization known for offering Earth-friendly reasons to live a green lifestyle, both big and small. By choosing to reduce your carbon footprint, you’re helping protect the planet for future generations. You’re also protecting yourself from health risks like air pollution and climate change. And by adopting sustainable practices when it comes to food, energy use, and waste disposal, you’re helping protect the natural resources we all rely on.
Previous Article 210 Sq. Foot Modern Day Tiny House Property- WITH NO LOFT!
Next Article 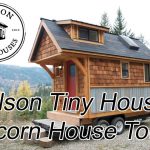